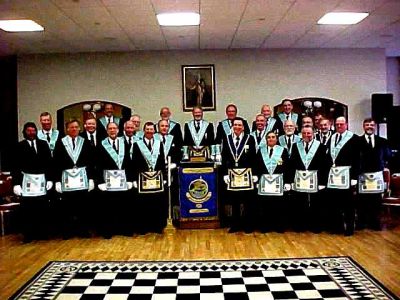 The Consecration was attended by 220 Brethren in the Ballroom at Freemasons Hall.

A very happy time was enjoyed by all and concluded with a delightful banquet.

The first regular meeting of Grand Junction Lodge was held at The Boat Inn, Stoke Bruerne on Monday, 17th May 2004. An initiation ceremony was performed in a convivial atmosphere with 50 members and guests attending.

Afterwards a four course festive board with wine and port was enjoyed by all.

Our third regular meeting was held at Stoke Bruerne on the 13th September when a double Initiation took place. This was a very warm and friendly meeting with many members and guests surprised at what could be done in such a small space. We have now initiated three new Brethren since May.

Our fourth meeting was held by dispensation at The Boat Inn, Stoke Bruerne on Monday 29th November 2004. This was a third degree ceremony with the room filled to capacity. The ambiance of the room encouraged a warm convivial atmosphere in which the ceremony was worked with many brethren involved. 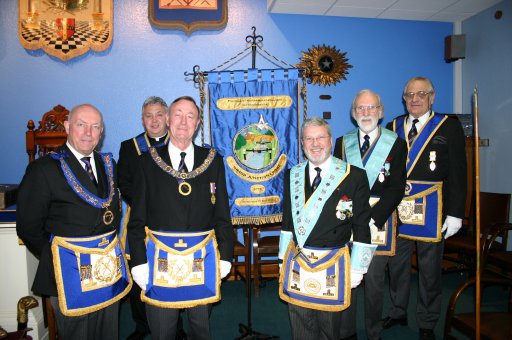 The Lodge Banner was dedicated on Tuesday, 11th January 2005. This took place at The Masonic Hall, Towcester with great pomp and ceremony, ably assisted by the Deputy Provincial Grand Master and Provincial Grand Chaplain. Brethren retired to The Boat Inn for a hearty Festive Board.

An informal Ladies night was held on Friday 25th February. The evening included a buffet with table magicians and Lincoln Noel playing on his piano supported by his Jazz Trio. A most memorable evening was experienced by all who attended.

Monday 14th March brought the first year of this new Lodge to a close with the Installation of our Senior Warden, W.Bro. Mike King, as the new Worshipful Master. It was lovely to see seven members of the ‘Hertfordshire Wanderers’, including the Deputy Provincial Grand Master of Hertfordshire, W.Bro. Atkinson, join us at this meeting.

We shouldn’t complain at ‘too many candidates’. In the May meeting we enjoyed another double Initiation Ceremony.

Our Provincial Grand Master, Rt.W.Bro. Nicolas Hart, attended as an honourary member and even assisted in part of the ceremony.

A very happy evening was experienced by all.

This was our away-day meeting. A double second degree ceremony took place. Our ladies were also invited to join us at the Festive Board.

The second of our 3rd degree Ceremonies took place this evening. This enabled our Brother who ‘winters’ away from his summer boating to fully enjoy his Masonry in Australia.

An emergency meeting was held, which enabled us to perform another 3rd degree Ceremony.

The Lille and Bruges trip was a most successful ladies weekend enjoyed by all.

The Installation meeting was a very happy evening ending with a four course dinner and port.

Another Initiation took place this evening.

Our ‘away’ meeting took place at The Gables, Leighton Buzzard where a 2nd Degree Ceremony was performed. The ladies joined us for an enjoyable Festive Board.

A 2nd Degree Ceremony was performed with an excellent rendition of the Tracing Board. It was a warm evening for everybody with an outside temperature of around 30°C. One of the best Festive Boards was enjoyed this evening.

Another 3rd Degree Ceremony took place this evening by dispensation.

The Ladies Festival was held at Freemasons Hall & Conference Centre in Northampton.

Our 4th Installation was held this evening with the Provincial Grand Tyler, W.Bro. Jim Tarry, taking the chair.

Our 7th Candidate was initiated this evening.

Our annual away meeting was held at Bletchley Masonic Centre where a 2nd degree ceremony took place. Many members came by their boats, which were moored nearby, including the Worshipful Master, W.Bro. Jim Tarry who hitched a lift on Arabesque. It was lovely to see the Ladies who joined us for the Festive Board.

The Worshipful Master, Brethren and friends has a most enjoyable day at Stoke Bruerne Cricket Club where a Summer Pig Roast was held, together with informal games, a quiz and raffle.

A 3rd degree ceremony was performed this evening.

The Worshipful Master arranged an informal “Fish and Chip Supper” for members and Masonic guests, accompanied with a sprinkling of Masonic Education. It was a most informative and fun evening.

W.Bro. Jim Tarry, arranged a Luncheon to conclude his year in office as Worshipful Master of the Lodge with many friends, Brethren and their Ladies attending.

Another successful Installation meeting with our 5th Worshipful Master, W.Bro. Mike Pusey, being installed into the chair. The meeting was attended by 60 Brethren.

We had another successful Initiation ceremony.

Our 6th Worshipful Master, W.Bro. Cliff Davies, was Installed in this fine Lodge. W.Bro. Davies was Initiated over 40 years ago and this is his first chair.

Another Initiation ceremony was held this evening for a long standing Stoke Bruerne resident.

Our ‘away’ meeting with the Ladies joining us for the Festive Board was held at Daventry Masonic Hall.

A Summer Festival Lunch was held at the home of W.Bro. and Mrs Holiday in Blisworth.

Another 3rd Degree ceremony was held.

We enjoyed a Ladies Weekend, described as a ‘Persuits in the Country’ weekend, at The Hellidon Lakes Hotel. A wonderful time was had by all who attended.

We have now enjoyed the Installation of our seventh Worshipful Master in the person of Bro. Trevor Morley who has been a Mason for over 20 years. His Mother Lodge is ‘Baltic’ in the city of London steming from the time he worked at The Baltic Exchange.

Another Initiation Ceremony and a rather special one as it was for the son of our former Treasurer (now ADC), W.Bro. Colin Stanbridge.

Although a cold night, a successful Festival Summer Party and Hog Roast was held by Bro. Bill Capell’s fishing lake.

A Second degree ceremony was performed at our away meeting at the Masonic Centre in Rugby. The ladies were, as usual at this meeting, invited to join us for the Festive Board.

Our candidate experienced his third degree ceremony this evening.

A successful Ladies Weekend, held in Lille, was enjoyed by all.

We enjoyed the Installation of our eighth Worshipful Master in the person of W.Bro. B. James.

An Initiation Ceremony was held.

Our ‘away’ meeting, where the Ladies were invited to join us for the Festive Board, which was held at Banbury Masonic Centre.

Along with the Ladies, other Masons and friends, the Grand Junction Lodge Pie ‘n Mash Night was held The Boat Inn, Stoke Bruerne.

We enjoyed a very convivial Installation Meeting with our ninthWorshipful Master, W.Bro. Charles Reeve, who had just completed a marathon cycle ride from John O Groats to Lands End via London where he took part in the London Marathon raising a good sum for Brain Tumour UK.

An Initiation Ceremony was held.

Our ‘away’ meeting, where the Ladies were invited to join us for the Festive Board, which was held at the Banbury Masonic Centre. A second degree ceremony was held.

A third degree ceremony was held.

We enjoyed a very special Installation meeting when we installed Bro. John Brierley as the 10th Master of the Lodge. He is the first Grand Junction Initiate to take the Chair.

An Initiation ceremony was held.

Our ‘away’ meeting, with our ladies invited to join us for Festive Board, was held at The King’s Masonic Hall, Market Harborough. A second degree ceremony was held.

A third degree ceremony was held.

Bro. Nicholas Smith was Installed as our eleventh Master.

An initiation ceremony was held.

Our ‘away’ meeting, with our ladies invited to join us for Festive Board, was held at Freemason’s Hall, Sheaf Close, Northampton. A second degree ceremony was held.

An initiation ceremony was held.

We had an Emergency meeting  for an Initiation ceremony which was well attended and made good use of some of our Past Masters who performed the Ceremony.  A most enjoyable Festive Board was enjoyed by all.

Our Grandmother Lodge, The Lodge of Fidelity No 445, based at Towcester performed a Second Degree Ceremony on our behalf on one of our Candidates with a most excellent rendition of the Second Degree Tracing Board.

A most enjoyable Ladies Lunch was held at The Marriott Hotel, Northampton with money being raised for The British Heart Foundation.

Today our twelth Master was Installed in the person of W.Bro. Trevor Boswell who is currently The Provincial Grand Secretary and is to become the new Deputy Provincial Grand Master in May.  The meeting was well attended and a good evening enjoyed by all.

At this regular meeting we Initiated a new member.

We all had a most enjoyable ‘away meeting’ which was held at St Ives, Cambridgshire where  a short Second Degree Ceremony was performed with our ladies and partners joining us for the Festive Board.

A Third Degree Ceremony this was performed evening.

The Worshipful Master and his Wife, Daphne, had a most sucessful  Ladies Luncheon at The Boat Inn.  Most enjoyable.

An informal dinner with entertanment was enjoyed by members, partners and friends during our Winter recess.

We started off a new year with an Installation Meeting and our 13th Master.  Another full house with over 60 members and guests attending.

We had a very good Third Degree Ceremony

We had our awayday meeting (which was a Passing) at The Masonic Hall in Warwick where our Ladies joined us at the Festive Board.

We had a Candidate for Initiation this evening.

An informal dinner followed by a quiz (organised by W Bro David Powell and his wife) was enjoyed by members, partners and friends during our Winter recess.  The winners were very generous in donating their winnnings to Charity.

The Worshipful Master, W Bro. Terry Stock, and his Wife, Anne, had a most sucessful  Ladies Weekend at Billesley Manor  near Stratford upon Avon.  53 attended the Saturday evening banquet and all enjoyed a lovely weekend.

Installation of our fourteenth Master.  Another full house and, unfortunately, had to disappoint a few Brethren who we were unable to accommodate.

Another new candidate for Initiation

Again as we don’t meet between September and March we got together for another night of fun.  A Quiz and Hot Buffet was enjoyed by all.

The Worshipful Master, W Bro. Bernard Morton, and his wife Sandie, had a most sucessful  Ladies Weekend in Portsmouth.  Over 60 attended the Saturday evening banquet and all enjoyed a lovely weekend witn a special maritime twist.

How time flies.  We Installed our 15th Master, W.Bro. Colin Stanbridge, into the Chair tonight. A very good evening was enjoyed by all.  Our Deputy Provincial Grand Master attended the meeting as did the Deputy President and Chairman of the Masonic Charitable Foundation.

Saturday 21st July 2018
A wonderful away meeting in Henley upon Thames (Passing Ceremony) where our Ladies joined us for the Festive Board after a wonderful cruise along the River Thames.

Monday 26th November 2018
Another most enjoyable Buffet & Quiz Night was enjoyed by all those who attended.

Monday 11th March 2019
We Installed our 16th Master, W.Bro. Graham Minett, into the Chair tonight. A very good evening was enjoyed by all including our Provincial Grand Master who attended the meeting.

Monday 20th May 2019
A most enjoyable Initiation Ceremony and Festive Board were enjoyed by all who attended.